Rescue in the Gorge: Right Place at the Right Time

On Sunday, May 31, we set out for a day hike in the Columbia River Gorge. We had a loose plan to start at the Horsetail Falls trailhead, hike up Rock of Ages, and either come back down the Horsetail Falls trailhead and cross Oneonta Creek or take the longer route around Bell Creek. The hike up ROA was lung busting as usual, but quickly gave way to the lovely rock arch and views of the river, and always exciting (ok, somewhat scary) walk across the exposed Devil's Backbone, and within 3 miles we were at 2,900 feet and at our first trail intersection. 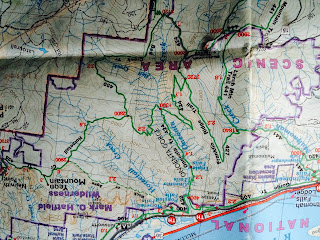 We headed west on the Horsetail Creek trail, crossed a few creeks, and quickly covered the 1.8 miles to the turnoff for Bell Creek. The last time I had been on Bell Creek was to perform some trail work on this much neglected 3.3 mile stretch of trail. We found the trail to be in remarkably good shape, and got to enjoy some beautiful old growth forest. Stopping to count the rings on one downed tree, it seemed as though some of the trees we were looking at were more than 500 years old. Gorgeous!

The miles passed and I reveled in the quiet of the day - listening to the chirping of birds, pika calls, and the drumming of grouse. Getting closer to Triple Falls and the Columbia River Highway, our quiet was interrupted by an increasing number of hikers. Triple Falls is a popular destination for day hikers, and on nice sunny days it tends to be a very well-traveled trail.

I always get nervous watching people above the falls. This day was no exception. There was a family with a couple of kids and a dog off leash standing on a rock right above the falls. All I could think of was what would happen if they slipped. Not wanting to be around to watch someone fall, we quickly hurried on.

Half a mile past Triple Falls, a little more than a mile and a half from the car, we encountered a man quickly hiking up the trail. Noting our large packs, he called out "do any of you have a rope?"

In the lead at this point, I got a sinking feeling in my stomach, "No," I replied, "What happened?"

"A girl slipped off the trail and she can't get back up."

We picked up the pace. We arrived at the fall point, to a small group of people looking down the slope. A woman - we later learned this was the victim's sister Stacy - had a cell phone to her ear and was talking with a 911 dispatcher. We looked down the slope and could just see a girl's head, arms outstretched, hanging on to a root. From where we were located it looked as though she was dangling and had nothing but air below her.

"April, just hang on. You are doing so good. You are strong."

"When are they coming? Are they coming soon? I don't know how long I can hold on," she called up to her sister.

This is when all of our Mazamas climbing and rescue training kicked in. Being in a group of people that had hiked and trained together, very little communication was required to actually make a plan. Michael dropped his pack and ran down the trail to see if there was a way to reach her from below. Wim jumped into action and started scouting from above to see if there was a safe way down to her. I busted open my pack to look at what I was carrying that might help with a rescue. What we needed was a rope. What we had was clothing.

Adam dug into his pack, and so did Anna-Marie. Bystanders chipped in. We quickly tied together rain jackets, long sleeve shirts, pants - what knot would you choose for this purpose? - to make an improvised rope. We tested each knot after it was tied, pulling hard on the line to make sure we didn't see any slippage.

Wim located what appeared to be a viable way to reach April from the side. We had a big tree up top to anchor the line. Wim headed down about 10 feet to another good sized tree with a flat spot for safety. He continued to scout the route, dropping a little bit lower. He could spot a path to get to her, but to ensure he didn't become a victim himself, he waited for the line to be completed. Adam finished it off, re-testing each connection point, tied it off to the bomber tree - how do you ensure that your bowline is tied properly when it is tied with sleeves? - triple backed it up, and threw the line down to me at the mid-station. Wim began an arm rappel down to April.

All the while this was happening Stacy was trying to stay connected to Multnomah county dispatch but the call kept dropping. The dispatcher was telling Stacy to get away from the trees - clearly not quite understanding where we were.

"I'm surrounded by trees," she replied, "and I'm not leaving my sister."

April continued to call up "Are they coming? When will they be here?"

From my stance off to the side and midway down slope, I could see the fear in both of their eyes - April was hanging on with all she had, unsure if the root or her arms would give out, and Stacy wasn't sure if the scenario had a happy ending.

April was visibly shaking, and called out about every 30 - 60 seconds asking when SAR was coming. There was no way to be sure, but we weren't feeling confident that SAR could make it in time. I was pretty sure we were watching a girl fight for her life, and while our team was careful not to put ourselves in harm's way, we still had to make a judgement call. Would our Macgyvered rope actually hold? It wasn't going to have to hold vertical weight, the slope was probably 70 degrees (close to vertical for the last 10 feet), but unlike a real rope that is rated and tested for such purpose we had to hope ours would work as intended. Adam was watching the anchor, I was watching the knots, and ready to alert to something coming untied, but still, there was some level of faith we just had to go on.

April noticed Wim coming towards her. There was some relief in her eyes. She called out "what is your name? You are the most amazing man I have ever met. Thank you."

He inched closer and closer, kicking steps, testing the security of the slope, ensuring all the while that he was staying as safe as he possibly could. Never create more victims, no matter how much you want to help. Finally he was parallel to her position. He leaned towards her and managed to loop the "rope" around her waist and secure it to her. She now had some amount of security from a fall. She stopped shaking.

Getting over to Wim involved a huge step - even for a girl with long legs - but she trusted what he was telling her, placed her feet where instructed, and made the step. She now had to make a rising traverse about 15 ft up to the tree where I was stationed. She pulled on the line, she kicked her feet in, and clawed her way upwards. Her sister, and others were shouting encouragement from the top.

When she made it to me, there was enough space that she could sit down, and get the weight off of her arms for the first time since she had fallen. I took her backpack off of her, told her to take deep breaths, and rest for the final push. Stacy finally broke down. She had held it together and showed amazing composure under pressure. Realizing it was almost over and that April was going to be safe, the emotions finally poured out.

Wim made his way back up the line and got into a position above me where he could boost her the final step. April found her strength and got to her feet, still not letting go of the line. She made her way over to him, and he made a step for her with his bent leg. She stepped up, he pushed her from below and Adam and Michael grabbed one of her arms and pulled her up. She was finally on solid ground.

Wim then helped boost me up, he climbed up, and we were all back on the trail. The sisters hugged, and cried. April was shaky and scratched up, but remarkably unscathed. She sat down, drank some water, and rested. We began the difficult process of untying the clothing. The knots had all held, as had most of the stitching. There was one jacket that had a hole. A white cotton sweatshirt had been the weak link - we found an inch-long rip - but it had held. We disentangled the few items donated by bystanders so they could get on their way. We stuffed the rest of the line into a pack, to be dealt with at the cars.

About 10 minutes after April was on safe ground a park ranger arrived on the scene. He asked if she was OK, and put out the call to cancel the ambulance and SAR. April asked if we could walk out with them. She was still feeling shaky and didn't want to fall again. We gave her a trekking pole to steady herself and started back down the trail. Twenty minutes into our walk out two SAR guys arrived  and continued to walk with us to the Horsetail Falls trailhead. At the trailhead we were met by a sheriff's deputy. The cumbersome process of official paperwork began.

We parted with hugs all around. I shared my contact info with the sister so we could all connect if needed. We had all gone through a gamut of emotions and we talked on the way back into town trying to process everything that had happened. A beer, or two, seemed like a great idea.

* June 02, 2015
Email ThisBlogThis!Share to TwitterShare to FacebookShare to Pinterest