For the last five summers, I have been lucky enough to get to organize a running camp on Mt. Hood. And for the last four summers, for three days I get to immerse myself in the fun and excitement of adults coming to summer camp, where they get to spend their days running on trails, learning from some awesome athletes, and enjoying the beautiful scenery.

This year I had the pleasure of meeting a woman who traveled from Queens, New York for the three-day camp—flying in on Thursday evening and back home on Sunday night on a red-eye. She had googled "mountain running camp" and had stumbled across ours. She was in the midst of working on some changes in her life and when none of her friends would commit to coming with her, she decided to come out for the camp on her own.

She seemed to radiate positivity and courage. She loved the beauty of the mountains, and felt empowered by the trails. On the last day, we do a 15-mile run from Timberline Lodge to the Ramona Falls trailhead—a gorgeous section of trail with incredible views of the mountain, of glacial carved canyons, waterfalls, and beautiful forest. She had some concerns that she could make the full distance, but really wanted to give it a go.

During the run, the altitude was getting to her a bit—and likely a lack of trail miles in the recent months—and she was in the back of the pack. We always keep our groups together and I was in the sweep role, so we got to spend a lot of time together on the trail. When her breathing got too labored on the uphills, we went over how to rest step to conserve energy. When even that didn't work, we went over tripod position to open up the chest and get deep breaths. We talked about not letting the negative voices in your head get you down, and finding a positive mantra to keep yourself moving.

By the last few miles, it was pretty obvious that she was seriously tired. And yet, she kept on plugging away at it. I could hear her talking to herself and encouraging herself to move, to just put one foot in front of the other. When we got to within a half mile of the trailhead she found the energy to run it in, and was greeted by the cheering of the rest of the group. The smile on her face after achieving her goal was infectious.

Two weeks later she tackled a trail race. She posted a few photos on social media and I chimed in with congratulations. She said it was a great race and she "wasn't last!" I responded, "and even if you were it doesn't matter, because you got out there and did it!"

And I meant it. With all my heart.

And then with a giant thunk, something clicked in to place in my brain. Something that I have known since I took on my first race. It doesn't matter if you are last. It matters if you don't try.

The last few years I've dealt with a fair number of injuries and health issues, both mental and physical, that have really derailed my fitness, and my running. This year I have finally been able to string together some solid months of running, and have started to feel ready to tackle a race.

But the fear of failure keeps holding me back.

And what is failure?

In my mind failure is being slower than I have been in the past. Of going from being a mid-packer to being a back of the packer. Of not being able to wear my favorite running skirts, because of the extra pounds that have crept on over the last few years. Of being last. Of having to truly accept that I am not the same runner I was 5 years ago.

That fear has paralyzed me from trying, because if I don't try, I can't fail.

And yet I do fail. Every day I am failing. The failure is in letting the negative voices and the fear prevent me from doing something that I used to love. 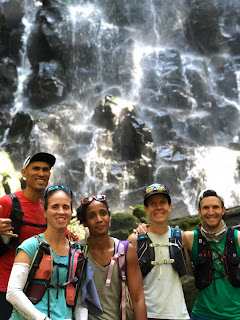 I loved preparing for a race. I loved standing on the starting line, with the energy of a crowd around me, not knowing how the day would go. I loved pounding out the miles—on trail or pavement—and feeling the elation of finishing a race.

Now it's time to try.

It's time to reclaim what I lost when I let fear creep in and absolutely destroy my sense of self. As though somehow my only worth is tied to a minute per mile pace, the completion of an arbitrary distance, or a certain place in the lineup.

It's time to take the advice I give to others and truly practice what I preach.

I'm on target to run my slowest marathon ever in October.

And I'm going to follow it up by running my slowest 50k ever, at a race that holds a special place in my heart, to honor a friend who isn't able to run anymore. Because if she could still run, she wouldn't be afraid of finishing last. In fact she would likely embrace it, and smile and dance her way to the finish line.

I will be in the back of the pack. I will wear what happens to fit on race day. There will be walk breaks. I might be last.

But I will try anyway.
* August 26, 2018
Email ThisBlogThis!Share to TwitterShare to FacebookShare to Pinterest