Finally a climb to post! I have been focusing so much on running that there hasn't been a lot of climbing in the last 7 or 8 months. However, that all changed last weekend when I got to attempt a one day ascent of Middle Sister. Typically, we do MS as a two day climb. From the trailhead at Pole Creek it is approximately 5000 ft of climbing (when there is no snow on the approach) and 14 miles roundtrip. We usually leave Portland around 7 am on Saturday morning, drive to the trailhead (5300 ft), and begin the hike around 11 am or noon. This allows us a leisurely 5-mile hike with overnight packs to camp at 7100 ft. The hike tends to be pretty easy, albeit a bit dusty. The first two miles are relatively good trail - although there has been a lot of blow down in the last few years that has made it a bit more challenging (needing to go around and over lots of logs). You climb very gently for two miles and then descend several hundred feet to Soap Creek. From Soap Creek it is another 1.5 miles to a climber's trail that takes you up above tree line.

This year we decided to change things up a bit. There was a Mazama provisional climb leader who wanted an evaluation of a climb and we both thought Middle Sister would be a good choice. Unfortunately for him the Mazamas have a strict rule of only one Mazama party per route per day. The Hayden Glacier route on MS was booked solid from the end of June though August for Sunday climbs (Saturday approach, Sunday climb). Thus we decided to give a one day ascent a try.

Steve picked his climb team and made sure the participants understood the rigors of our intended plan. Steve and I drove down together, leaving Portland around 4 PM on Friday afternoon. After a quick stop at a grocery store in Sisters we made it to the trailhead around 8 PM, just ahead of Steve's 8:30 pre-climb meeting. The remainder of the team arrived and we quickly discussed our intended plan for the next day. Everyone seemed very excited about the adventure on which we were about to embark. I got my tent set up, threw in my sleeping bag and pillows (the best part about car camping is pillows!), and snuggled in to bed around 9:15. Sleep didn't come until after 10, but once it did I slept really well for a few hours.

The alarm went off at 1 AM and the preparation for the day began by headlamp. The thermometer in my tent read 38 degrees so it wasn't overly cold. I got layered up, had my breakfast sandwich, and took down my tent. Once out of the tent the temperature quickly dropped to a brisk 32 degrees. The team was very organized and we hit the trail at 1:59:30 - 30 seconds before our intended leaving time.

The trail was much more interesting in the dark by headlamp. We had no moon to work with so we were completely dependent on the little beams of light our headlamps pumped out. The blowdowns made things tricky at times. Once off the trail it could be hard to find your way back. Thankfully I had a GPS track from the year prior so whenever we veered off course I was able to get us back on track pretty easily.

We found ourselves at the Soap Creek crossing in just about an hour. It was much spookier in the dark and we had to find the bridge that would lead us across the creek. The water was running high so the first few steps were on rocks instead of bridge which made it more interesting. Within about 1/4 mile of the creek we found ourselves in solid snow without a boot track to follow. The GPS track came in very handy at this point as navigating through the trees, in the snow, and in the dark is not easy. We did a lot more up and down on the snow than we would typically need to do if we were following trail. The going wasn't easy but it wasn't as hard as it could have been either. About 4.5 miles in we stopped to put on crampons as the snow was pretty firm and we were hitting some steeper sections of snow. This meant I had to take off my trail running shoes and switch over to my boots that I had carried for the first miles. It may have added weight to my pack but it was totally worth it for the ease of movement and lack of pain in my feet. Unfortunately one girl was having some severe trouble with blisters on her heels - she had rented boots and they were not agreeing with her feet. Also on an unfortunate note, I didn't carry my med kit as we were going light and Steve carried his kit instead. He had moleskin (not overly useful) while I carry a comprehensive blister kit as I have struggled with terrible blisters in the past. He did however get her patched up and we were moving again in relatively short order.

We just missed getting above tree line for sunrise. But we were still making good time and arrived at my typical campsite at 7100 ft at 5:30 AM. We took a bit of a breather here and ate some snacks as we evaluated our route. The ridge that leads up to Prouty Pinnacle was pretty flattened out this year due to the higher than normal snow pack. This would make our ascent up to the saddle straightforward and pretty mild on our calves.

As we climbed to 8000 ft Steve decided it was time to rope up. This was also the time where we had to do a check in with the girl who was struggling with her blisters. She had slowed down quite a bit and it didn't look like she was feeling overly good. After talking with her Steve decided that she and her boyfriend should go back down to "camp" at 7100 and wait for us there. The rest of the party roped up and continued to the saddle. We made short work of this stretch and pushed on up the North Ridge route. About 9400 we encountered the steep section of the climb. The snow was not good this year - quite icy and non-uniform. This made forward progress harder than it really needed to be as sometimes a foothold would break out as you weighted it, dropping you forward slightly - burning more energy.

Steve protected the steep section, opting for a rising traverse up this 150 foot pitch. I typically do this part as a fixed line which I much prefer. For the first time in recent memory I found myself tied to a climber who was completely uncomfortable and unskilled - his crampon an ax technique were questionable at best. I was pretty convinced he was going to fall and take me with him. Not a fun stretch of climbing for me. As we made our way to 9800 we took off the ropes and climbed untethered the final 2050 feet to the summit. The views were spectacular! It was a bit windy and as we had two climbers waiting for us below we didn't stay long. 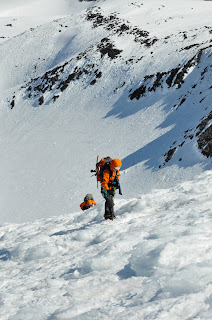 On the way down we switched up the rope teams with Steve taking the nervous guy this time around. On our way back through the protected stretch I pulled one picket that had been placed on relatively benign ground and replaced it on the sketchier traverse as I passed through. This would enable the team behind me to be more protected on that stretch with two pickets on the traverse instead of one.

Once we were back at 9400 we coiled up the ropes and continued back to "camp" without them. It had been almost 5 hours since we left our other two climbers and it was now approaching noon. We stopped for a long break (45 minutes), melted some snow as several people had run out of water, rested and had some lunch. It was also time to strip clothing as it was getting pretty warm in the sunshine. I went from long johns, climbing pants, long bra-tank top, top base layer, softshell jacket, hat and gloves to shorts, tank top, and arm warmers. Quite the change in a very short period of time!

After our long break we reversed course and followed the GPS track back to Soap Creek where we filtered more water and then began the 2 mile trek to the cars. The last 2 miles of this hike always seem extremely long somehow - much longer than 2 miles. We made it to the cars just after 3 PM. Enjoyed a few snacks, changed clothes, and then headed for a late lunch/early dinner at a Mexican place in Sisters. Then made the 3 hour drive home. I walked in the door just before 8 PM on Saturday night. All in all a great climb - very enjoyable as a 1 day adventure!